Our single stepped hull delivers high levels of stability in rough seas and a Smoother, Drier Ride with unmatched Manoeuvrability!

Rather than create bubbles, the goal of designing a step into the bottom of a modern deep V powerboat is to reduce wetted surface (and thus reduce friction) by creating a pocket of air under the boat in an area that would normally be wetted surface. As the boat moves forward the height transition in the hull causes an area of low pressure, behind the step. This creates vertical pressure, which pulls in air through the hullside notches and down along the step. As the boat moves faster and faster, the pocket of air behind the step becomes linear bigger. Wetted surface goes down, and speed goes up offering unmatched performance in terms of speed and fuel economy.

Our single stepped hull is distinctly different – in concept, and especially in performance compared to multiple stepped hulls. We have deliberately followed a single stepped approach because this hull design offers, all the benefits of stepped hulls at maximum level and in particular when the boat cruises fast in choppy seas.

However, a step design is usually only good for a single angle of “attack” with a single dynamic center of gravity (CofG), and this is what ZEN 39 perfectly achieves!

But stepped hulls should not be considered a panacea. High-performance designs proved unpredictable or required a high degree of driving skill to avoid catching an edge or ‘dipping” the bow and swapping ends, or submarining into a wave.


To avoid that, we have adopted a steeper longitudinal angle along the keel with a progressive angle in the aft hull, combining it with an innovative “delta” shaped sub-step. The outcome is more lift aft than at the step itself, so the boat runs with a slightly bow-up attitude, keeping it dry, which ensures less spray to our passengers.

This design maximizes maneuverability effortlessly. As you turn any boat, the bow wants to go down. Aboard many other stepped hulls, which are running flat or slightly bow-down to begin with, this is a skittish situation because the bow can actually dive in and break the back end of the boat loose. This is not the case with ZEN 39. Our sharp bow deadrise“cut” the waves smoothly while the two extra large strakes add buoyancy and further complement the efficient lift and good handling properties of the step. 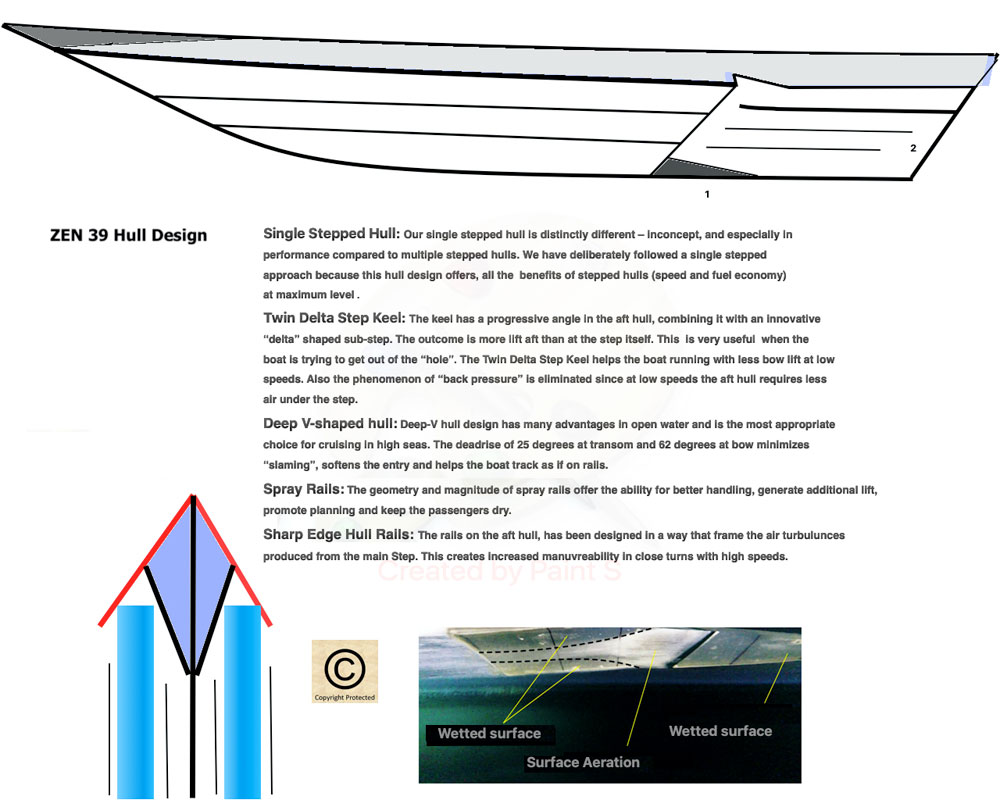 Even at wide-open throttle across 1.5 meter seas, our step hull never exhibited a hint of instability. High-speed turns were smooth and predictable!

Web Design and Hosting by